Paraguay Birds & Wildlife
Our Service
Our Team
Our Values
FAQ

Without a doubt we have a fantastic human team who work on what they are passionate about, and they love to teach what they know to people who also enjoy nature and that is our greatest strength! In addition to being recognized professionals in their fields of study, some common characteristics in all of them is that they are first and foremost fanatical observers and, without a doubt, are the professionals with the most field experience in Paraguay, which ultimately marks the difference when looking for and finding the species in the field.

For me it is a real honor to be able to work with these great professionals whom I admire and who have been my teachers in the art of observation and interpretation of nature. My most sincere thanks to Ulf and Jota they have taught me and all the patience and dedication that they have had with me in all these years. My eternal gratitude for agreeing to be part of this project! I also want to give special mention to the young people of the team, all extremely talented in their multidisciplinary themes and in their ecosystems, a true dreams team! 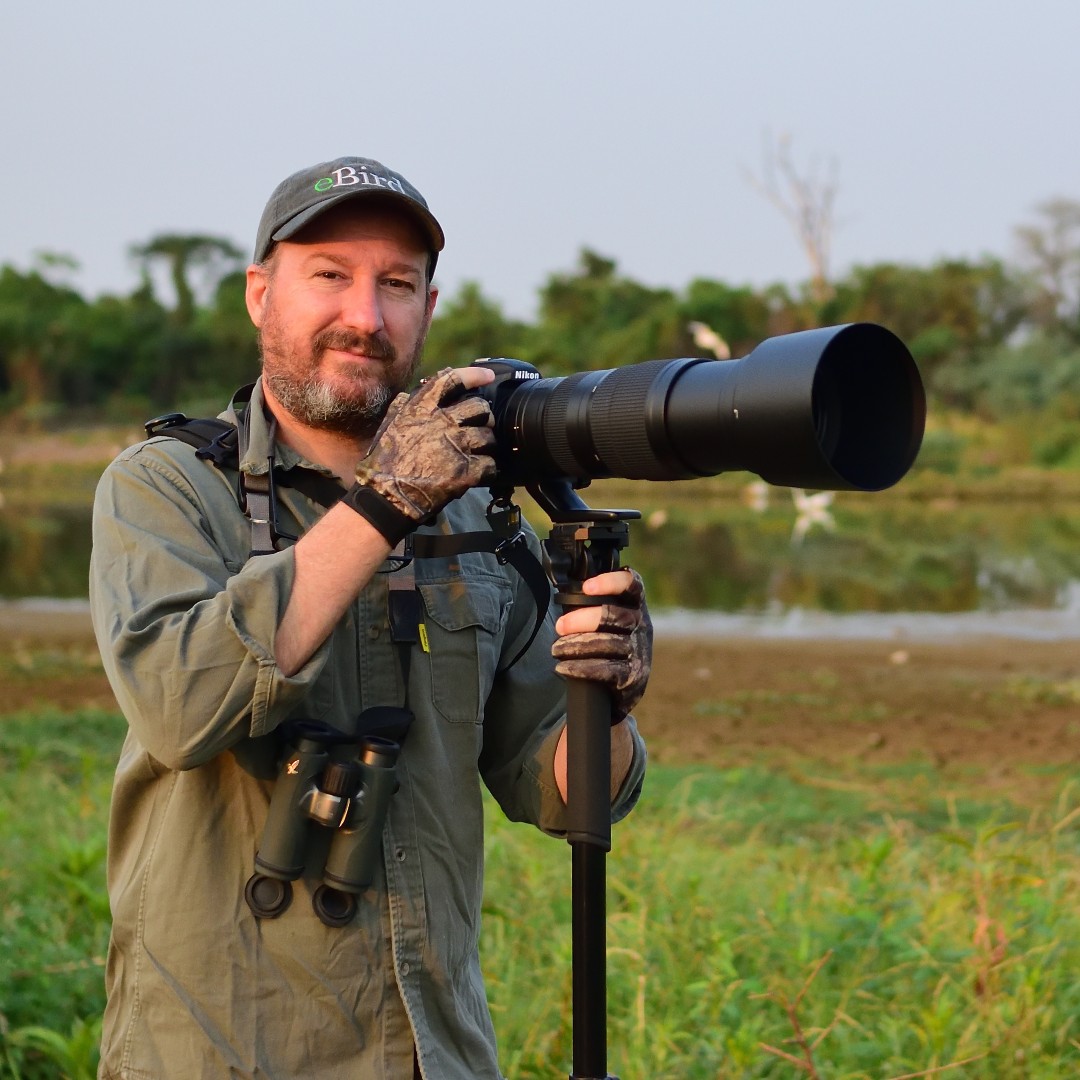 Founder, Tour Leader and Main Guide of birding and wildlife tours of Paraguay Birding and Nature. I have developed and been in charge for 17 years of the Department of Nature Tourism in the Tour Operator Desarrollo Turístico Paraguayo SA., the first wholesale Tour Operator in developing a professional nature tourism in Paraguay. I have been an environmental educator for 10 years, a professor of Nature Tourism, History and Geography in the career of Tourism of the American University of Asuncion. I have done many specializations, courses and academic studies at national and international levels: Associated Nature Tourism, Ecosystems and the Birds and Fauna of the Neotropics, and the Environmental Education. My first degree was in Business Administration at the Catholic University of Asuncion.

I am a professional guide of Nature Tourism and Photographic Safaris dedicated to this profession for the last 17 years, I am also an Advanced Level Certified Bird Watching Guide of the course organized by Audubon International, I am also an independent researcher and collaborate with one of the scientific web pages more with the greatest reputation in Paraguay: www.pybio.org. I have been the author and co-author in the writing of several scientific manuscripts of relevance to the knowledge of the birdlife of Paraguay. I have found and collaborated with other colleagues in the discovery of 5 new bird species for Paraguay and in the documentation of several species that were considered hypothetical or pending documentation for the country.

I am in the top 1 of observers in eBird and in the top 2 of the observers with the highest number of bird species observed in Paraguay. To date, I have more than 15,000 photographs and more than 1,500 recordings of wildlife sounds, especially birds and mammals, that I share on several scientific websites and many of them have been published in books, environmental education material. I am part of the International Committee of the South American Bird Fair and I am one of the founders of the Nature Observer Club of Paraguay.

Since I was a child, observing nature in general and birds and mammals especially, have been my fascinations. Observing them has always been a passion for me and inviting other people to observe, understand, protect and enjoy them in their freedom is a goal that I have worked for this lifetime. I invite you to come and experience the fascinating nature of Paraguay and region, a country in the hearth of continent of the birds.

Ulf is a German biologist living in Paraguay for about 40 years. His specialty is entomology, but he has worked with many taxonomic groups. He has dedicated his life entirely to scientific research based mainly on field surveys and his scientific production is simply impressive: "More than 70 new species for science" (especially insects) and "hundreds of new species registered for Paraguay and the region". He has been the author and co-author of hundreds of scientific manuscripts of great relevance that have been published in prestigious scientific journals.

He is the principal investigator of: www.pybio.org one of the scientific web pages referring to the fauna and flora of Paraguay that currently has a photographic database of more than 25,000 photographs and more than 6,000 point maps; I invite you to visit this true jewel of the species of animals and plants of Paraguay, it is constantly updated and growing. Also, a theme not least for his guided tours is that he is an exceptional cook! This allows us a logistically exceptional advantage of being able to stay in many hotspot sites that have places to sleep, but do not have food service. 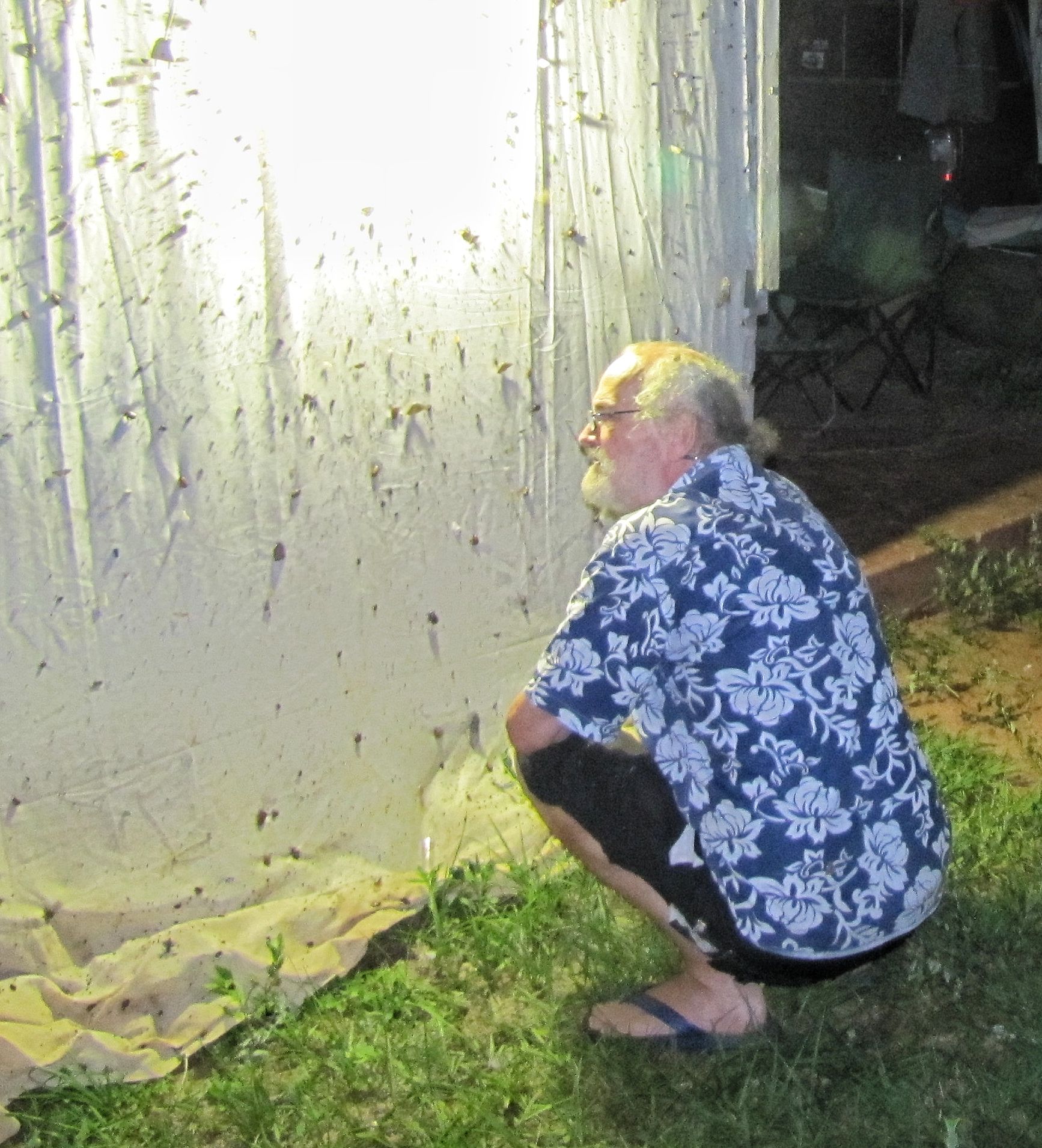 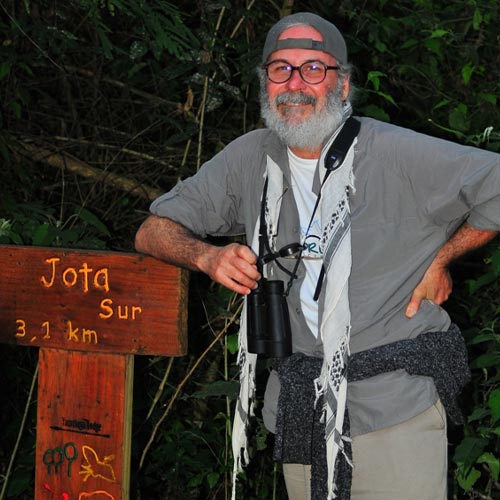 Jota is undoubtedly a reference of Ornithology in Paraguay and the region, his field experience and his huge knowledge of culture make a birding walk become a real pleasure and an endless waterfall of information and indescribable experiences. He is a master of professional masters of bird watching in South America. If you are one of those observers who wants to delve into the natural history, ecology and other details of the species, I invite you to enjoy a bird watching trip with Jota and then tell me what you think of the experience!!!

RESUME - CV: - 40 years of field ornithological work (collection and observation) in the Republic of Paraguay and bordering countries, with more than 1,200 field trips, - Tagua Project, 1987/1990 in El Chaco Boreal, Paraguay and Bolivia. REVEPA Vertebrate Review Project in Paraguay, 1991/1995, by the Swedish Museum of Natural History, - Support to the Indigenous Communities of Paraguay - Tomaraho Project - Bahía Negra, Alto Paraguay (wildlife inventory and sustainable use of natural resources), 1983/1987, - Project to support the Mbya Guarani groups in Carumbey (San Rafael), Itapua department, 1990/1991. Project for advising the indigenous communities of the Pilcomayo River, 1997/2000, - Research project on Hanta-Virus  2001/2004. Paraguayan Chaco, - Research project on Leishmania, 2004/2007. Eastern Region of Paraguay, - Rapid Ecological Evaluation of Paso Bravo National Park, Department of Concepción, - Parliamentary Advisor for the Commission for the Defense of Natural Resources and the Environment. Participated in the drafting of the Wildlife and Protected Areas Laws of the Republic of Paraguay, - Delegate for Paraguay to the Rio 1992 Summit and Summit Against Climate Change Cochabamba, Bolivia, 2010, - Independent ornithologist guide of Foreign Groups and Conservation Organizations in the Republic of Paraguay and Argentina, since 1994, - Exhibitor in Congresses in Bolivia, Argentina, Spain, Sweden, Brazil, Paraguay. Topics related to fauna, - Author and Co-author in Scientific Journals of Ornithology and Fauna in General since 1987, - He has registered 27 new species of birds for Paraguay and 1 for Bolivia.

Raúl Rivarola is a biologist (National University of Asunción), master in forests and livelihoods (University of Copenhagen) and has a master's degree in tropical forestry and management (Technical University of Dresden), with field work on the thesis carried out in the Yvytyrusu.

He trained in organic agriculture and development cooperation (CERAI - Center for Rural Studies and International Agriculture), as well as in educational gardens, gardening and urban arboriculture, while living in Madrid. He has work experience in the departments of Alto Paraguay and Boquerón, as well as volunteering in numerous rural places in Paraguay and abroad, including university modules in Ethiopia and Indonesia. In addition, he works in educational projects and planning and management of urban trees. He is a member of the board of the Paraguayan Ethnobotany Association (AEPY) and part of the council of the Association of Observers of Nature (CON) of Paraguay. He is also part of the scientific review committee of the OMNES Journal of Columbia University, where he teaches urban arborization courses with emphasis on native species.

He tells us at the age of 11 he took possession of the book Ñande Yvyra Mata Kuéra and never left behind his passion for trees. His first work was done with 16 years as a guide on the path of the Yrupé Ecological Park. In Madrid he worked as a guide in the Royal Botanical Garden. "Guiding people to know nature, plants, their properties, their relationships with birds and other animals, and other curiosities, is not a job, but a passion for me," he says. And I really appreciate your passion, because when I thought that I could not learn from plants, Raul appeared and I am passionate about this wonderful vegetable world so exuberant in South America! 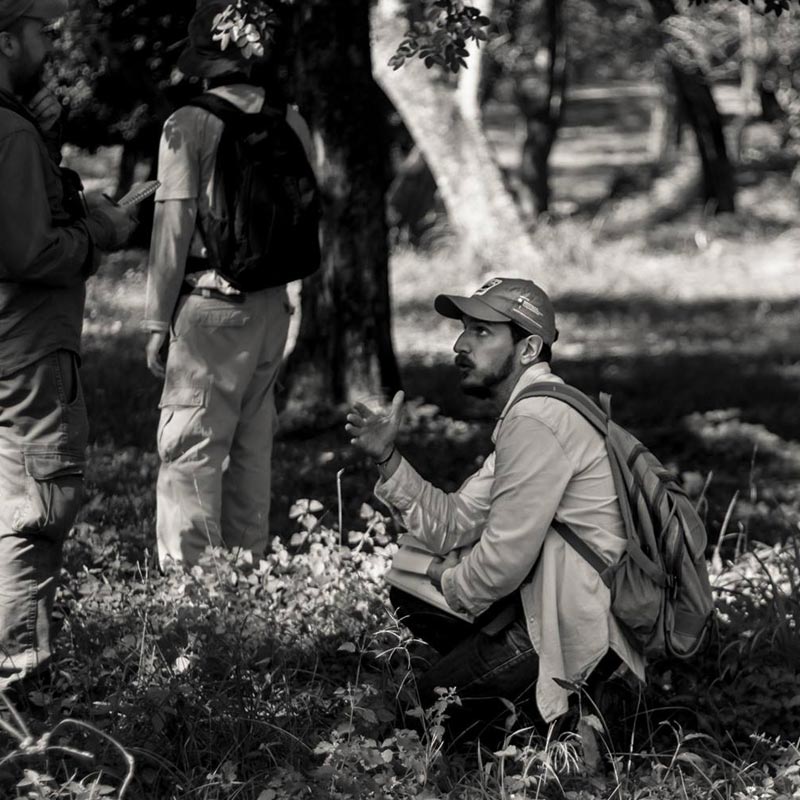 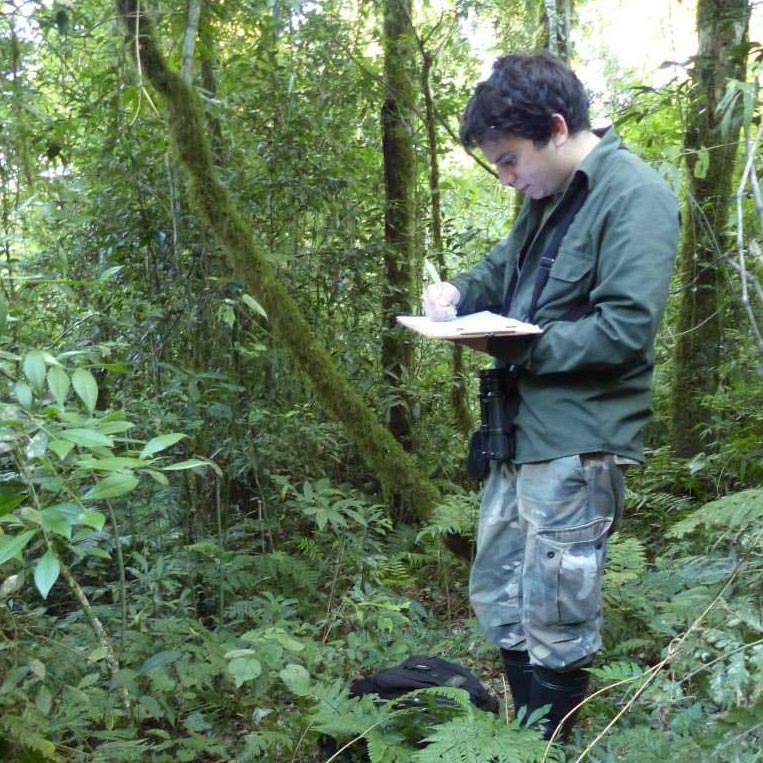 Born in Puerto Iguazú, Argentina, city of the imposing Iguazu Falls and the great Atlantic Forest. He is an innate naturalist, birds have been part of his life long before he was born. His family has a project of more than 30 years called the Garden of Hummingbird installed in this iconic tourist city, it has become one of the great attractions of Puerto Iguazú and is one of the most visited . In the garden of his house Leandro lives daily with hundreds of hummingbirds of several more than 8 species and many other species of birds.

The passing of his life among free birds has made him a great defender of conservation and an expert observer, he dominates the jungle and the songs of the colorful birds of the Atlantic Forest, all his innate gifts of birdwatchers, his knowledge of plants , animals and insects, besides being a wonderful human being who loves his nature and showing it to those who visit him, makes him a great companion. It is a pleasure for us to have this, that more than friend would say a brother that the jungle gave me, as part of our team.

‍RESUME - CV: - Owner of the Garden of Hummingbird of Puerto Iguazu.

Sergio is one of my young companions of bird watching with whom it is a real pleasure to share field trips for his multidisciplinary knowledge (entomology, paleontology, archeology etc.), enthusiasm and dedication, he is also a great photographer and very rigorous regarding his observations. It is undoubtedly the observer with the most systematic contemporary records of Asuncion. I am very happy that you are part of this great team.

He studied Biology at the National University of Asunción and is currently dedicated to researching the fauna of Paraguay, particularly the birds, insects and fossils of the country, as well as having a special interest in the history of local science. He is the author of more than 40 scientific publications, including numerous articles in magazines and collaborating in books or book chapters, as well as co-editing the Bulletin of the National Museum of Natural History of Paraguay. As of 2014, he is categorized as a researcher by the National Council of Science and Technology (Conacyt).

For several years he has observed and photographed Paraguayan birds, especially those in the green areas of Asunción. 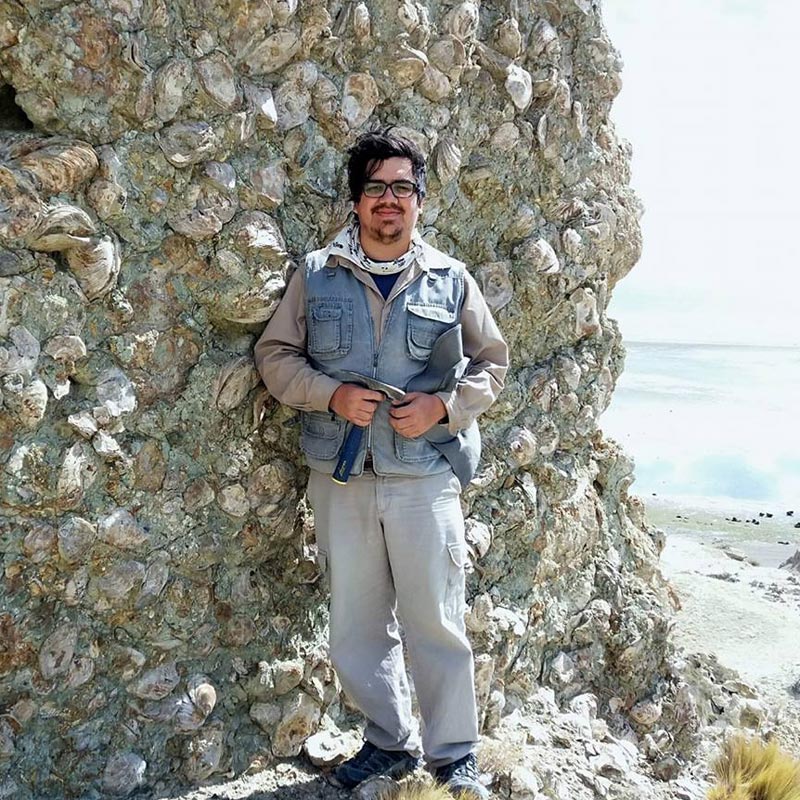